The Mazatlán Vortex  11.8.11 to 12.11.11
We arrived in Mazatlán on November 8th late in the afternoon.  The trip over from Cabo was the only unpleasant passage we have had so far.  Sea’s and wind on the port beam made for a more then uncomfortable ride crossing the Sea of Cortez.  When we got close to the harbor entrance in Mazatlan after 33 hours and called to let them know we were looking for a slip the El Cid marina told us not to come, the harbor entrance was closed due to high sea’s.  How disappointing.  One more hour of  traveling south to the commercial harbor and it would all be over.
We actually spent two nights in the commercial harbor anchored with the fishing fleet as the seas took their time settling down.
When we finally arrived in El Cid we were rewarded with a lovely resort/marina complete with two pools, hot tub, poolside cafes and great people.


After a few days of R&R we fell into the rythem of Mazatlán life.  Jeff and I signed up for a month of Spanish lessons with a lovely Mexican women.  She and her American husband live downtown near the Centro Mecado.  Each Monday, Wednesday and Friday Jeff and I would take the bus to their home.  We each had a private lesson after which we would go have lunch then off to the Mercado to pick up some fresh fruits and veggies from our favorite fruiteria, carrot cake from our favorite pastelleria, tortillas y salsa, dried marlin and what ever else our arms could carry home.
Tuesdays and Thursdays we would do homework in the morning then I would take a long walk on the stunning beach.  Often as I looked out at the ocean I would see fish jumping right out of water, the sea life is so rich here.  After lunch we would head to the pool for an hour or two of water volleyball.  If we did not get together with some other boaters for dinner we would head to the Plazuela Muchado for a stroll and dinner.  Every time we went downtown there were  several bands  playing in different plazuelas.  Mazatlán is a city that loves music and a party. 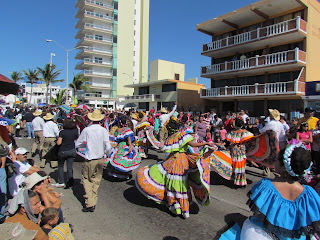 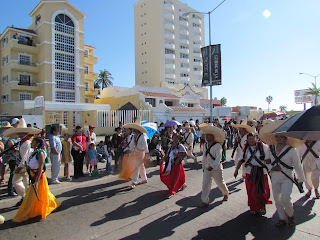 We went to a parade along the 10 kilometer Malacon for the Dia de Revolutión and were so happy that we did, the sight was just amazing.  Lots of families, seniors, teenagers etc. lined both sides of the Malacon as a huge parade passed by.  Lots of drums.

Every school, club, sports team, volunteer organization, fire dept etc. had an entry.  It was great.  After the parade we went to Plazuela Zaragoza for a food festival sponsored by the Rotary Club of Mazatlán.  We struck up an conversation with a couple from Canada who had recently purchased a house in downtown.  They invited us over to see there house and go out to lunch later that week.  It was such a friendly feeling but not unusual for Mazatlán, people are super friendly here- Mexicans and expats.

Well, we planned on 4-5 days in Mazatlan but stayed 5 weeks!  We enjoyed Mazatlan much more than we expected.  The standard of living is quite high here.  We felt more like home then not.  The grocery stores were bigger than Von’s and super clean.  Lot’s of cultural activities, stunning beaches and really nice people.  I am sad to say that I have become a bit suspicious of strangers with all the reports of violence and robberies.  I let my guard down when I realized that usually if a Mexican approached and said hello he or she just wanted to practice their English and be friendly or...sell a timeshare! 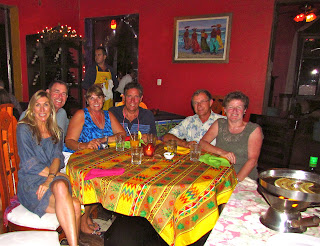 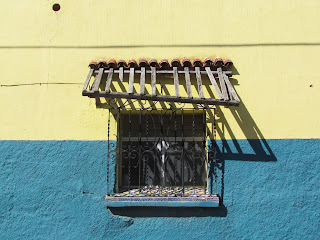 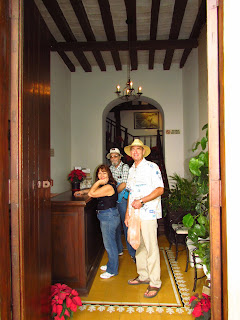 The weekend before our departure from Mazatlán our Spanish teacher invited us her home for a dinner party.  I asked if I could help cook to learn some recipes.  What a great day, it felt like Thanksgiving to me.  We spent the day in the kitchen cooking Pescado de Limón, Pollo Pimiento, Chilis en Nogado, Chilis Rellenos and of course, flan.  What a treat to spend a day talking in Spanish and cooking.  Jeff and two other couples arrived later and we had a wonderful evening.  Thank you so much Horti and Carlitos. 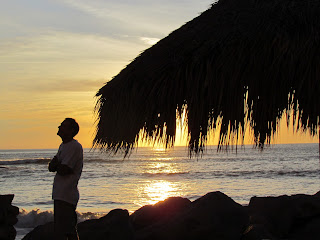 Saying good bye to new friends is a bitter sweet part of our new lifestyle.  We love the anticipation of discovering a new place but it is hard to say good bye.  Also, I must say that I am a bit home sick as the holidays near and I miss my family and friends.
But all in all, we wake up everyday happy and thankful for the experiences that we are having.
We will spend Christmas eve with some fellow boaters for a party then mid night mass at the church.  Christmas day we have been invited to a traditional Christmas dinner potluck with about 10 other boats.
We appreciate so much the new friends that we have made but like I said, we really do miss our family and friends from home especially at Christmas.