It is said that a cruiser writes his plans in the sand...at low tide.
Well, we have found this to be the case for our cruising season.
We no longer state plans, we mention our intentions.

We returned to the Buena Vida, lying in Paradise Village in Nuevo Vallarta after a 6 week trip home for our sons wedding.  We intended to spend a couple of weeks in Banderas Bay on the hook at different anchorages, exploring little towns, surfing and generally just hanging out.  Then, we thought that we would ready the boat to summer in Paradise Village and head home to Ventura, California.

Well... we were e-mailing  back and forth with our good friends and fellow cruisers who had just returned to Costa Rica after an incredible trip to Panama, The Galapagos, Cocos Isle and finally back to Marina Papagayo in the north of Costa Rica.  After a short discussion of how fun it would be to travel together we booked a flight for a 2 1/2 week visit to Costa Rica.
Stan and Val were great hosts!  They whisked us away from the airport directly to Tabacon Hot Springs where we stayed for two nights.  We were greeted at the front desk with fresh tropical drinks in champagne glasses and on it went.  We lounged in the spectacular hot springs for two days with brief interruptions for gourmet meals and a massage in the spa. 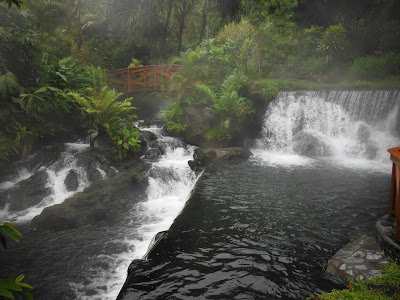 After we broke away from the total bliss of  Tabacon we decided to drive to Monterverde Cloud forest.  Wow!  The term unimproved road now sends a shiver up my spine.  Unimproved seems too nice of a word for what we endured.  Bone jarring, disk hurniating, head aching road is what they should be named.
When we reached the little town of Santa Elana with it's paved streets we clapped with joy.

Our Coffe Plantation tour guide must have a degree from UC Davis.  He knew all about botany and the cellular differences between plants, he was great.  After a really comprehensive coffee education we moved to the chocolate portion of the event.  Yum!  We tasted chocolate in all phases of production and learned a lot about chocolate.

Our first night in Monteverde we went for a night hike.  This was actually one of the highlights.  Things seem so much different in the dark, the sounds and smells are more intense, it was super fun.

The next day we enjoyed a great hike in Monteverde Preserve.  Check out the Monkey, so cool. 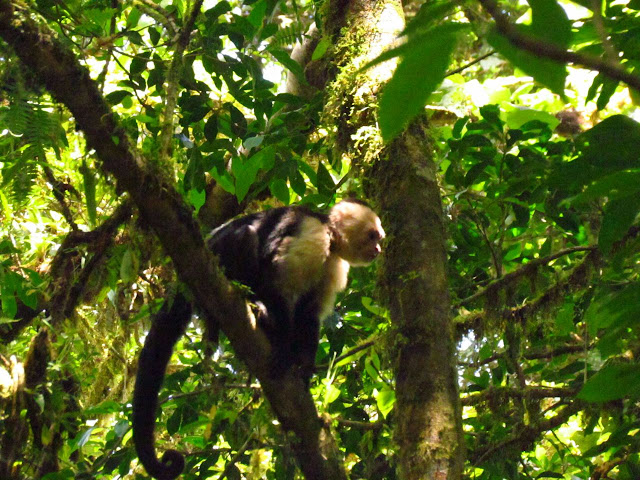 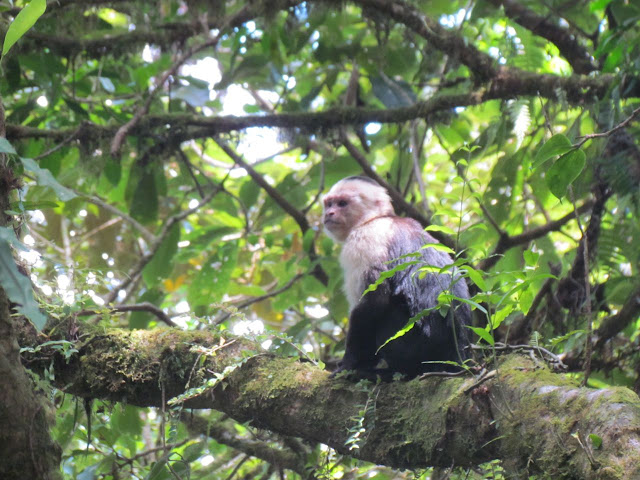 After a great few days in Monteverde we headed to the coast to stay aboard Pax Nautica.
Que Bonita!  Pax in sadly for sale as our friends have commissioned a bigger boat and take delivery next spring.  Pax is such a lovely boat we hate to see her go. 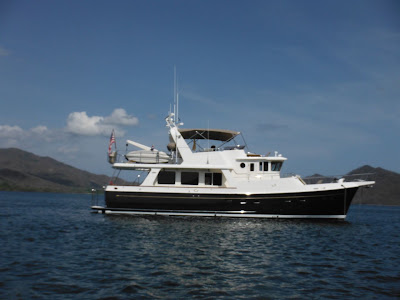 We took the boat out to a beautiful isolated cove.  We were the only boat there and the water was like a pond.  We snorkeled, kayaked up into the mangrove swamp, and generally enjoyed the heck out of this little piece of heaven. 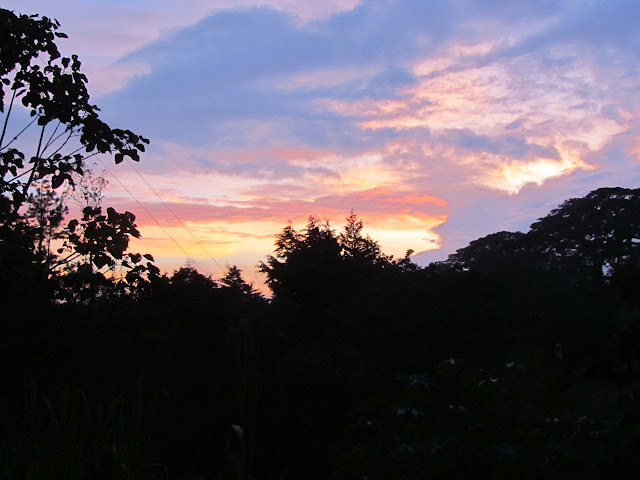 The next leg of our trip was to Tamarindo.  Tamarindo is famous for consistent fun surf and we were not disappointed.  Stan and Jeff took surf lessons and I rented a board.  The water in CR is so warm it is hard to believe.  We loved Tamarindo as we were there in low season, at high season I could imagine way too many people and chaos but off season...perfect.

Stan and Val had to return to Pax Nautic and prepare for a trip to the states so Jeff and I were on our own.  We stayed in Tamarind for a bit longer then rented a little four wheel drive to hit the road.


Next, we drove south to Manuel Antonio Nacional Parque.  Great beaches, surf was perfect, every evening at sunset the waves would pick up just enough for a beginner and down the other end of the beach it was bigger for the more advanced.  The jungle comes right to the sand and creates some natural shade.  So wonderful. 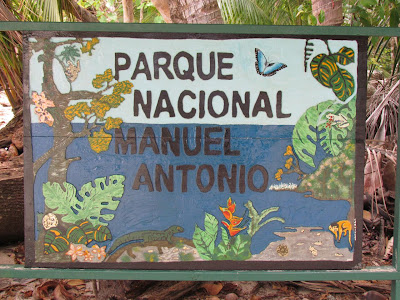 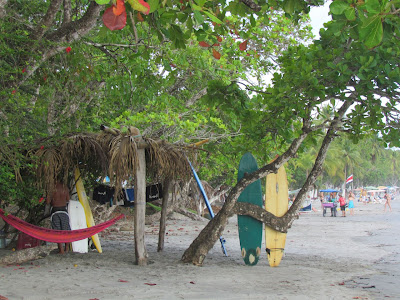 We spent a day just wandering around Manuel Antonio Nacional Park and it was really cool.  Beautiful trails in a thick jungle that lead to secluded incredible beaches.  It was really quite spectacular. 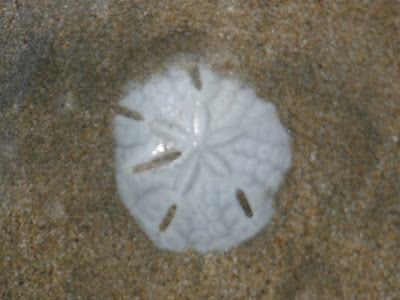 Off we went a bit further south to a little surf town called Dominical.  We stayed on a nature preserve with it's own jungle, beach, butterfly garden and orchid garden.  No air conditioning, only a ceiling fan.
We finally reached melt down.  It was sooo hot and humid I felt like I was on fire.  We walked through the jungle to the beach one day and decided that we are in love with DEET.  There were so many mosquitos!
Yes...Malaria and Dengue fever carrying little jerks.  We sprayed our hair, clothes, skin, everything.  Not the most fun hike in our life but still rewarding.  The jungle was so thick and wild here it was worth it...maybe. 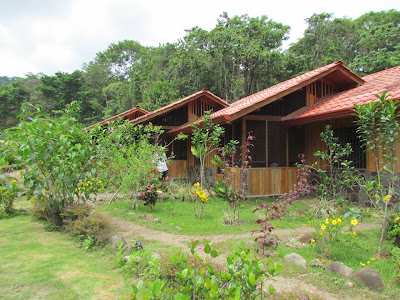 On Mothers Day it was so hot that we decided to get in the car and go for a scenic drive with the air conditioner on!  We ended up at this great waterfall for the afternoon.  Some local kids hiked to the top and slid down like a natural water slide.
Oh No.  That is so tempting but I do not want to get hurt.  Ugh! 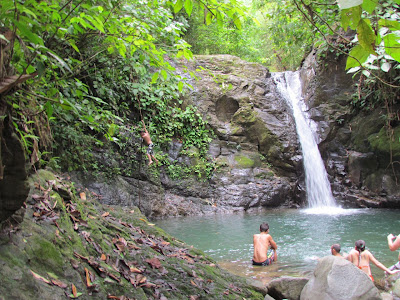 Well, it was time to fly home to the Buena Vida back in Mexico.    Out last Sunset picture in CR. 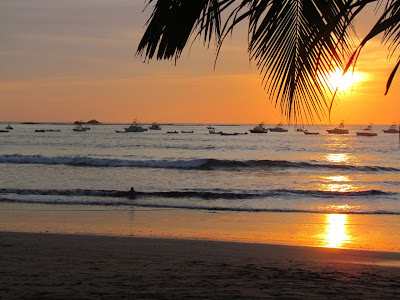 Remember the opening line?
It is said that a cruiser writes his plans in the sand...at low tide.

Well... We got back to the Buena Vida after a 12 hour travel day and we were beat.  We got the boat back in order and were going to walk to the market for breakfast food.  On our way down the dock we were invited aboard a neighboring sailboat named Nirvana.  Several couples were aboard for happy hour.
So, we stopped by for a visit, we had never met these folks before.  We found out that they were leaving the next morning for the Sea of Cortez with another boat named Three Sheets.
Jeff and I were still a bit sad that we were going to miss the Sea this year.  Well, to make a long story short, we totally changed our plans and left the next day with these two other boats for the Sea of Cortez.  So much for our plans to leave the boat in PV for the summer.
After a wonderful trip to Punta de Mita and Chacala we are currently in Mazatlan for a week waiting for Hurricane Bud to settle down, then off we will head up the Sea to visit a few islands before we head into La Paz.  Our current thought is that we will summer the boat in a marina in La Paz, but who knows.  We should be back to Ventura late June to early July.
More to come.