Almost the last leg of our Mexican journey, this year!

Our last minute decision to head up to the Sea of Cortez proved to be a good choice for us.  The Sea was spectacular and the cruising grounds are unbeatable.
We waited in Mazatlan for about one week in anticipation of favorable winds.  We not only wanted to avoid adverse conditions but we were willing to wait for some South, South East wind to push us along the 200 mile southern crossing.

Our weather window opened up and off we went with our “buddy boat” Nirvana with Bob and Sheri aboard.

We were able to sail about 16 of the 30 some hour trip and we were happy about that.  We tend to motor sail at night with conservative sheets up.  This leads to a less eventful night and better sleep for who is off watch.  Night watch was fabulous as there were no other boats in site, we had almost a full moon and really calm conditions.  Yeah!

Caleta Partida Was the perfect spot to begin our Sea of Cortez adventure.  It is a large well protected cove that is really the space between Isla Espiritu Santo and Isla Partida.


"The Sea of Cortez is the second most diverse marine body in the world.  It s home to 31 species of whale and dolphins-one third of the world's total.
The region also serves as a breeding ground for sea lions and marine turtles, and is a migratory corridor for 210 birds species.  Some 500 fish species, 4,848 known species of marine macro-invertebrates and 626 forms of macro algae live in the region."
Sea of Cortez  A cruisers guide  Breeding and Bansmer

One day as Jeff and I walked along the white sand beach admiring a few fishing huts and collecting shells we met a pangero who lived there.  Jeff inquired about purchasing fish (Tiene usted pescado?)  The pangero indicated that at the second sand spit there was some fish and he could bring it to our boat in about an hour.  (All in Spanish of course.)
That sounded great to us.  We walked on admiring the views then the pangero approached us on his panga and asked if we would like to go with him to his hut.
(Hum... to get fish or be held captive by some homicidal fisherman who was banished here to protect the citizens of La Paz?  Pretty sure to just get some fish so in we went!)

What a fun ride through clear blue water to the prettiest little fishing village ever.Our new friend, Alfomro, was quite proud of his hut replete with satellite T.V.
After lots of compliments, pleasantries and the requisite filleting of fish, he returned us to our dingy (still there) on the first beach.   Did I mention that he  gave me a beautiful little sea shell?  I will cherish it always.

We shared our “catch of the day” with our friends on Nirvana and Journey aboard the Buena Vida that night and it made a great dinner and fun story.

Alfomro turned out to be in need and stopped by the Buena Vida a couple of times looking for dish soap, batteries, and a pen.  Before we left I also gave him some oranges, plantains and beer.  How could we not, he was so darn sweet. 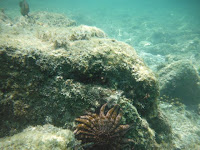 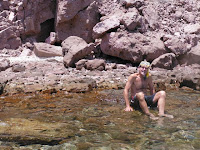 Nirvana had to go into La Paz and we needed to make time heading North as we were not sure how long we would be able to stay in the Sea so, we said our good byes, weighed anchor and off we went the 21 miles to Isla San Francisco followed the next day by a trip to the little fishing village of San Evaristo.


San Evaristo did not have the beautiful white beach and pale blue water of our last two anchorages but it had a special charm all it’s own.  The tiny village was home to some lovely generous people and off to the side was an OK snorkel/kayak area.


We went ashore to investigate the "town" and buy some tomatoes at the tienda.  On our way back down the beach we stopped at a hut where the fisherman were filleting their catch of the day.  Again, Jeff asked if we could buy some fish.  The men looked at the boss who nodded in affirmation so the filleting began in earnest.
The boss scowled and told the fillet-er to get the bones out and wash it for us too.  When all was done Jeff asked how much and the boss just smiled and said it was a gift.  Wow, we were so touched by that gesture.   Those with so little are willing to give so much.  Jeff gave them some pesos for cervesas and many thanks.  That little encounter just warmed our hearts so much. 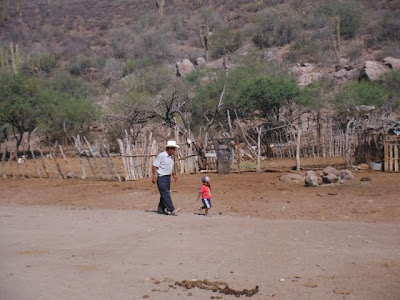 A couple of anchorages later we arrived at Agua Verde.
Agua Verde was one of the high points of the Sea for us.  The bay was big and beautiful and the snorkeling was amazing, I felt like I was in an aquarium.  The middle of the bay had a sandy beach and fishing village.  We anchored here for a few nights to take advantage of the wonderful snorkeling.  We met some local cruisers who live in Loreto who were having a 3 day party ashore.  They were really friendly and invited us to hang out with them on the beach.  One of the couples remembered our Yacht Club friend Rob on s/v Ocean Fever from a few years ago.  What a compliment to Rob!

Well oh well, we have arrived in paradise!  Candeleros/Bahia Blanca.  A super protected cove from any swell in the Sea with a couple of miles of sand beach and a resort/time share hotel!

This hotel is very new and especially this time of year has few guest so they welcome the cruisers like royalty.  We dinghied ashore and walked up the stairs to the property where we were met by the security guard.  He warmly welcomed us and invited us to use the pool and make ourselves at home.
We dined at the pool side bar that night and felt so regal!  We spent a couple of days hanging out there basking in the luxury of ice cold cocktails, WIFI, trash disposal, public showers and free towels.
(As you can see, I have a new definition of luxury living that includes trash disposal!)

We interrupted our poolside lounging with a lunch date with some fellow cruisers at the beach side palapa.  The guy who worked there goes out to the bay and dives for clams when you order them!  I have never dived for clams and neither had Mike our new friend on SV Camille so, Mike and Verana, Amy and Ralf of Naner Moon and Jeff and I met there for lunch and a clam diving lesson.

This turned out to be and all day adventure.  We arrived at 1:00 ordered some beers and asked if we could go with him to learn how to dive for clams.  This all in Spanish of coarse.  All seemed good so we also ordered some fish tacos.  About an hour and a half later the fish tacos appeared.  I am not exaggerating,  I had time to borrow Mikes SUP and paddle around for a bit while we waited.
Another round of beers and fish tacos later we determine that our Spanish must not have been good enough for him to “get” the clam thing so we resigned ourselves to just enjoy what we were doing and pretty much give up the clam dive lesson.
Good thing we did not order more beers because out he came mask in hand ready (finally) to go clamming.  Mike and I excitedly got our gear, mine consists of a mask and snorkel, Mike has a mask, snorkel and a knife strapped to his leg.  OMG, I am diving with Johnny  Quest!  He looked so cute.  Jeff having had just about enough of my shenanigans and just sent me off with a smile.

Cesar, our cook/dive master was great.  He would point out the little clam "eyes" to me and after demonstrating once, he let me dig the clams out. Johnny Quest, a man of action, was already off on his own hunting and gathering, knife strapped to his leg.

After a bit we all returned to the palapa for a cooking demonstration then finally the eating part.  Delicious!  We returned to the Buena Vida around 5:00pm parched from the heat.  It was really a hot day I imagine around 100 degrees, we had to head up pool side until dark to recover from our lunch date ashore!  Oh the hardships of cruising life!


The Sea of Cortez is truly a magical and peaceful place that we love.

Next Blog entry on the way in a couple of days.  So much to share!