Another last leg of our journey in Mexico aboard the Buena Vida. 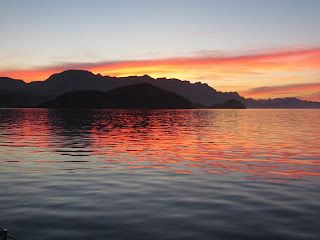 The stark beauty of the Sea of Cortez
has inspired nauralist, photographers, oceanographers, novelists and us to document and share what they found.
We were surprised by our
reaction to this area, it offered a different
kind of beauty and peace that we did not expect.  Although, the beauty, at times was interupted by bouts of strong winds. 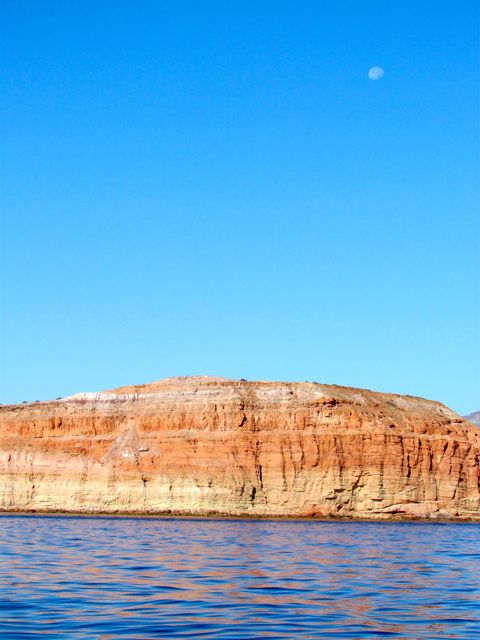 New Vocabulary words for the Sea of Cortez:

Yuma Low:                A thermal low, generated by the hot summer temperatures around the
Yuma, AZ area.  As the hot desert air rises around Yuma, it causes a
flow of air north from the cooler Sea of Cortez. The result is a
welcome south  southeasterly wind that blows up into the Sea durning
summer.  Thank you Yuma Low, we had great sailing!
Chubasco:               Not the hot sauce, that's Tabasco!   These are strong but short lived
squalls that occur in the summer months in the Sea of Cortez.
No Tabasco for us please.

Coromuel:              Winds found around the La Paz area that begin in the evening and
usually blow all night, often up to 30 knots. We really did not need those
extra hours of sleep.

Elefante:                A localized westerly wind generally around the mid to northen Baja
Peninsula, similar to Coromuel only a bit stronger.  Named for the trunk
like shape of the clouds that often proceed these winds not Jeff's appitite.

The Sea of Cortez is full of narrow channels between islands and high mountains called the Sierra de la Gigantas that create some unusual wind patterns.  This added a fun and exciting element to our time in the Sea.

Our first night in Candeleros I woke up to the boat lurching and swinging wildly.  The wind was so hot and dry that it was hard to open my eyes and my skin literally hurt form the dryness.
After I was awake for a few hours Jeff got up to take a turn.  It was to hot for our bedroom so I slept in the cockpit with a sheet and pillow.
Around 4 AM Jeff woke me up as a sport fisher was dragging across the bay toward us.  They had all the doors closed and air-conditioning on so I guess they could not hear or feel the wind.  We tried to hail them on the VHF, shined lights in their window to no avail.  About 8:00 am the next morning I heard a "Oh Shit!" from their boat.
Good Morning Sunshine!

Yes, I was a little bitter as we were up most of the night on anchor watch and worrying that they were going to hit us so, when they spent the first several hours of the beautiful morning trying to get their boat out of the sand I only felt a little bad.


We were hailed by our friends on Nirvana, they were anchored at Agua Verde so off we went to spend a few days with them on our way back to  La Paz.


We happily met up again with our friends Bob and Sheri.  Our final dinner party together this season was aboard the Buena Vida so we invented a new cocktail in honor of the occasion.  "The Agua Verde" 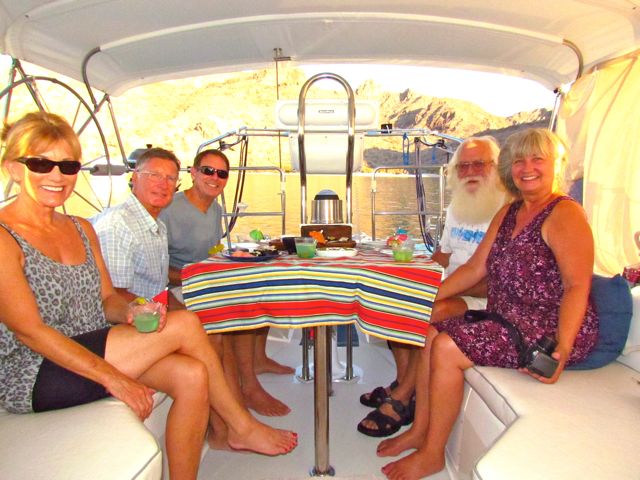 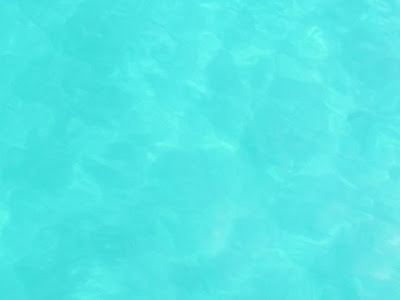 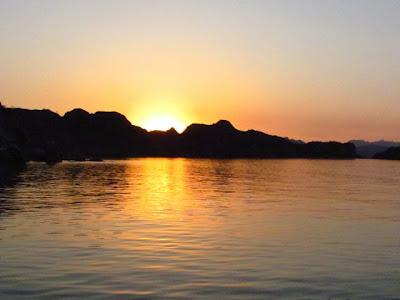 Notice the drink in Sheri's hand is the same color of the agua verde above.

Now before you raise an eyebrow over the canned fruit situation remember, if up in the Sea of Cortez for any period of time there is very little access to fresh fruit and veggi’s.  So... One must be prepared to take drastic measures.
But for heavans sake... Never compromise on the quaility of your Vodka!


We went ashore to the tienda in hopes of anything fresh, tomatoes, fruit whatever.  I inquired if they had tortillas but no.  The clerk said that the women in the store with us makes them though.  I asked if we could get some tortillas and she said yes, it would take about 20 minutes. Great!  She then puchased a couple of scoops of flour from a large bag in the store, a jar of crisco like stuff and prepared to leave.  I asked her if I could go with her and learn how to make tortillas.  (puedo ir contigo porque quiero aprender que hace tortillas?)  The women smiled warmly and said yes, so off we went to her charming and simple home.  One room with a small kitchen, a bed and a dresser.  The outhouse is out back and the sons bed is open air in the front yard.  When we arrived her husband was sitting on the bed practicing guitar.  While Martina and I made tortillas Jeff had a good conversation with her husband.  He is quite ill with heart failure and felt compelled to show Jeff all of his medications.

Tortilla making was a great experience, the husband thought that I should return one more day for practice then I would really have it!  What a nice family.


As we departed Agua Verde we knew our time in the Sea was coming to and end.
We had mixed feelings as one could spend months here and still never visit the same anchorage twice.  Each place is so beautiful.  But, it was time to head home and be with our family and friends in Ventura.


We stopped at several more anchorages on the way to La Paz with the only stipulation that we get in the water and snorkle each day. 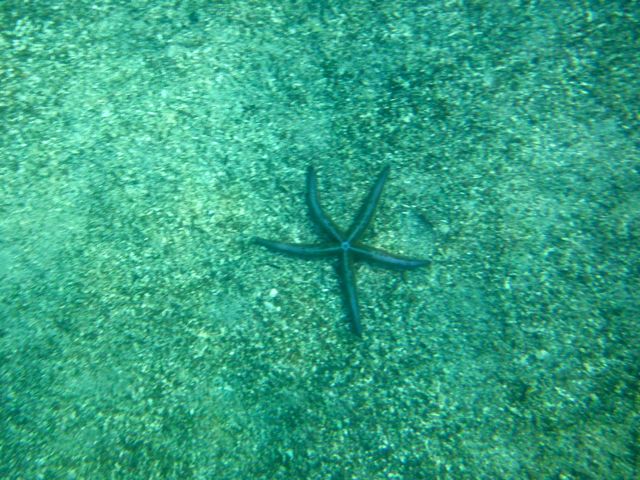 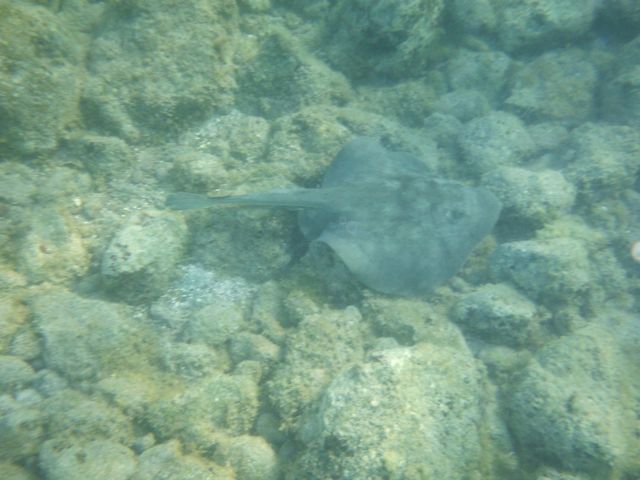 Our last anchorage was back where we started, Caleta Partida.  It was like the Sea was telling us it was time to go home.  As we arrived the wind was blowing out of the north making the cove a bit sloppy but it was already 6pm and we wanted to drop the hook.  Wind be damned, we dinghed over to a protected area at the side of the cove where the water cleared to a pale blue. I swam around looking at the sandy bottom, watching puffer fish, rays, little fish then all of a sudden...A SEA SNAKE!  OMG! it was white like the bottom with dark brown spots.  Super poisonous and deadly.


I really wanted to look at it but then it turned and looked at me.  Sheeze!


I turned around and swam for the dinghy as fast as I could.  That really scared me.

That night the Corumuels blew pretty good.  Starting around 9:30 and building.  By 10:30 it was really howling and I could not sleep.  The boat was lurching and swinging with gusts consistantly between 25-30 knots.  Gee this is fun.
I sat up and read and watched to make sure we were not dragging until 2:00am.  This was the second time the Buena Vida endured 30+ knot winds overnight in the Sea and lucky for us both times she did great, never moved and inch!

It was still howling the next morning and predictions were the same for the next night due to the low pressure system in the Sea - the pressure gradient was creating some exciting wind conditions.   Ugh!

Dangerous sea snakes, big winds, murky water, this is untenable!  We took it as a sign that it was time to go Home.


We are now in La Paz decommissioning the the Buena Vida and readying her
for Hurricane Season.  This means cleaning every nook and cranny, storing any jars and canned goods in bags in the lowest coolest part of the boat.  (We have heard stories of canned goods exploding from the heat.) Cleaning and removing all sails, lines, dodger, solar panels, stowing the dink, surfboard whisker pole etc.
The less windage on deck the better outcome in a big blow.  Also, we do not want to risk something flying off some other boat and breaking one of our precious solar panels.  This is hard and hot work but we will sleep better while away knowing we have done all we could to ensure the safety of the Buena Vida.  She has taken great care of us this year and we appreciate her now more then ever.

We should be home early July and we are looking forward to it.  We have been out of our home for 9 months and it will be nice to be with our family and friends in lovely Ventura again.